Pity poor George Washington who in this piece is confronted with not only the entire British Army, but the problem of getting good press coverage. The answer? A publicity agent and cameraman primed to publicize his famous crossing of the Delaware. 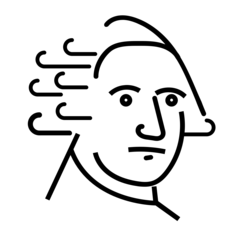 The characters (4): George Washington; Fredrick Boston, a soldier in the Continental Army; Hap Nobis, a publicity agent; Pat Quinn, a camera person. (May be played by actors of either gender. It’s called “acting,” man.)

NOBIS: (entering with Quinn) Is he here yet?

QUINN: His tent’s empty. Nobody here.

NOBIS: (to Boston as he enters.) You seen the General?

BOSTON: He’s outside cleaning his gun.

NOBIS: Did he know we had an appointment?

BOSTON: Who are you?

NOBIS: Never mind. How long’s he gonna be out there?

BOSTON: General Washington sets his own schedule, sir. No one tells him what to do.

NOBIS: What kind of rinky-dink army are you running here?

BOSTON: Sir, this is the Continental Army of the Potomac, General George Washington Commander in Chief.

NOBIS: Yeah, yeah. I’ve read the write-ups. Look, go out there and tell the General that I need to see him.

BOSTON: I can’t guarantee anything.

NOBIS: Just bring me a General. (Boston exits.) I can’t believe the way this place is run. You got the cameras ready?

QUINN: All loaded up, Boss. Man, the light’s gonna be terrible.

NOBIS: But you brought the spotlights.

QUINN: Got them in the van.

WASHINGTON: (appearing at the doorway) What’s all this?

NOBIS: General! George Washington himself! This is an honor, sir!

NOBIS: Volunteer? (laughs) Hardly. I’m Hap Nobis from New York. The Continental Congress has hired my firm to do your P.R.

NOBIS: Public relations! Publicity! Look General, this war’s not going all that great, you know? They thought it needed some good publicity.

WASHINGTON: I have no idea what you’re talking about.

NOBIS: Look, the British and stuff … I mean, you’ve had some bad luck.

WASHINGTON: I am building an Army, sir.