This is a “Dessert Theatre” presentation (OK. It can be done with or without dinner ... even without dessert.) This very proper English murder mystery has plenty of suspects and a corpse who assists the police. Even the police and the grandmother are possible villains. Dinner is Served is an expansion of the Three or More Characters script “A Dark and Stormy Night.” Royalty $25 per performance. 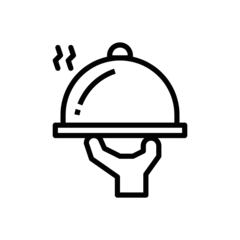 KENSINGTON: (entering) I say, what’s all the ruckus?

KENSINGTON: (looks at the body) Dear me. So he is. And right before dinner. You think we should do something?

KENSINGTON: I can see that, dear girl. After all, I’m his brother. I should be the one screaming and jumping about.

EDITH: Then why don’t you?

PENELOPE: There’s someone at the door!

KENSINGTON: They always say that.

HOLMES: (entering) No need. I let myself it.

HOLMES: I had a strong tailwind. (offering his hand to each of them) Inspector Watson Holmes of her Majesty’s Royal Scotland Lawn. You are?

HOLMES: Your last name is different.

KENSINGTON: By jove. That does seem curious.

(the dead man has some help for the Inspector)

SMITHMORE: (carefully easing himself off the couch, moving a hand of the frozen actors out of the way to work himself into a standing position) Well, they all had their motives. And it did hurt quite remarkably. (turns to show his back) See the knife? Quite uncomfortable.

SMITHMORE: For a moment, then … how did Shakespeare put it? “All is nothingness?”

HOLMES: Now … as to the murderer. I assume you know these people.

SMITHMORE: Quite well, actually. (as he points them out) She was my most trusted maid and also named in my will. He was my dear brother set to inherit my estate, and she was to marry me next Tuesday but had been having second thoughts after I gave her a hugely expensive diamond ring.